Danishka Esterhazy is one of the many talented filmmakers featured on our Women In the Director’s Chair Channel on Canada Screens. She’s a recent recipient of the Amazon Video Direct Inaugural Filmmaker Award at the Sundance Film Festival and has a lot of poignant things to say about the film industry. 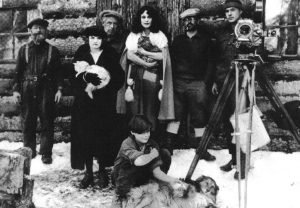 March is also Women’s History Month and I asked Danishka about a woman in history who has inspired her – her answer: Canadian Hollywood pioneer, Nell Shipman. I hadn’t heard of her before and after our chat, decided to do a little research. She was an actor, author, screenwriter, director, production company owner, animal trainer and did her own stunts. Most importantly, she fought to write and play strong, adventurous women in her films. She is best known for Back to God’s Country which is considered the most successful silent film in Canadian history!

Danishka’s second feature film, H&G is a modern day Brothers Grimm  Hansel and Gretel fairy tale. This approach offers a unique way to look at child poverty. A brother and sister duo from the city end up lost in the woods. They tread a fine line between accepting food and shelter provided by a stranger and the insidious undercurrent of danger that comes along with it. The story will pull you in and the performances by these child actors are remarkable.

P.S. – our movie recommendations are here and you can always have some fun with Canadian online casinos.